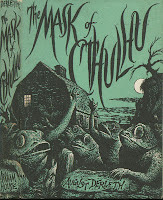 August Derleth, founder of Arkham House Publishers, kept the H.P. Lovecraft legacy alive when it threatened to disappear into pulp obscurity. Now, more than half a century later, Lovecraft's name is venerated the world over. Derleth (along with countless other writers) penned his own tales utilizing the Lovecraft mythos, published as The Mask of Cthulhu (1958) and The Trail of Cthulhu (1962) .

Derleth has been criticized by Lovecraft purists for drastically altering the philosophical underpinning of Lovecraft's original stories into a more balanced, even Christianized, cosmic whole. Lovecraft was a staunch atheist who saw the universe as a bleak, cold, indifferent place in which humanity had no place; his followers, however, adapted the mythos to their own needs and creative visions. Some feel this more humanized viewpoint weakens the impact of Lovecraft's mythos; I tend to that opinion, and have read very few of the Lovecraft followers. 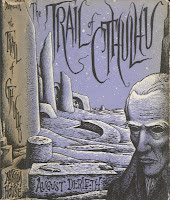 However, August Derleth succeeded where Lovecraft often failed: writing readable prose. In fact, many of the stories here seem almost to be the classic Lovecraft stories re-written in readable prose. Derleth's style is almost hard-boiled, with no affectation of language, no preoccupation with an archaic style, no excessive adjectives. Yet still the stories achieve an atmosphere of cosmic dread, of fear and loathing, of awe at the vastness of space and the littleness of mankind in its void. "The Seal of R'lyeh" is a fantastic story, with a deepening (or perversion, as Lovecraft experts may see it) of the Cthulhu mythos and some really strong, evocative, subtle writing.

It's excellent to see these two works back in print together in Quest for Cthulhu (boo on the Godzilla-esque cover art); however, my moldering copies were published by Ballantine paperbacks in the early 1970's and smell a hundred years old (or is that countless eons?)--I wouldn't part with them for anything, not even my very own shoggoth. While I much prefer the original visions of Lovecraft himself, Derleth's stories are powerfully imagined, clearly told, and come highly recommended from this lifelong Lovecraft fan.

Posted by Will Errickson at 9:54 PM