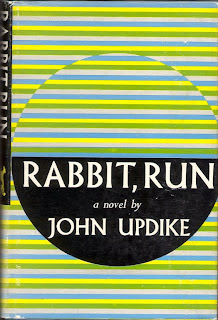 I don't often read contemporary mainstream novels, preferring genres like hard-boiled crime and science fiction. John Updike’s fiction always seemed to me a world of polite, tidy and quotidian lives never touched by madness or horror or indeed any kind of intensity whatsoever. With his reputation as a chronicler of the malaise of middle American manhood and marriage, I was never motivated at all to pick up an Updike book. So it was to intentionally detour from my usual reading fare that led me to pick up an old copy of the paperback edition of his 1960 debut work, Rabbit, Run. (Collecting old paperbacks, it’s my only vice). It’s the first of four works detailing the life of an ordinary American man, Harry "Rabbit" Angstrom.

The novel begins, rather famously (at least, I’m assuming it’s famous; the words seemed to recreate an echo in my head, so I think I came across the first lines somewhere else): “Boys are playing basketball around a telephone pole with a backboard bolted to it. Legs, shouts. The scrape and snap of Keds on loose alley pebbles seems to catapult high into the moist March air blue above the wires.” Yes, that’s present tense, the tense so beloved of “writerly” writers, and Rabbit, Run is the book that popularized this (oh-so delicately self-conscious) style. 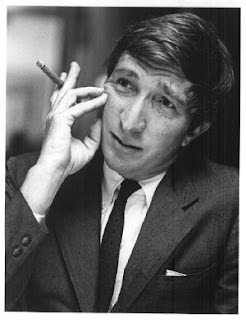 Rabbit is Updike's alter ego, I suppose, a young man meant to chart the changing moods and shifting sands of maturity as it struggles to overtake youth. As the title implies, Rabbit is full of motion not unlike the frenzied stop-and-start panicked leaping gait of a wild rabbit escaping danger. Distinctly unhappy in his own skin, in his own life, a lost youth of basketball glories far behind him, Rabbit’s marriage to Janice is heading south fast. Rabbit, run, indeed. Rabbit and Janice, who’s drunk in the middle of the day, watch the innocuous old TV show The Mickey Mouse Club and one of the Mouseketeers simply says "God gives to each one of us a special talent." And Rabbit and his wife are struck silent: "Rabbit and Joyce become unnaturally still; both are Christians. God's name makes them feel guilty." It's the first of many instances of the cloying nature of Rabbit's faith, as well as ambivalence about his wife. 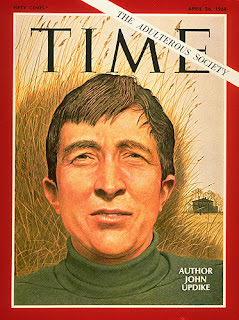 Remember what Brad Pitt says in Fight Club about immature men who can't commit: "We're a generation of men raised by women. I'm wondering if another woman is really the answer we need." Unable to stand the hopeless life he’s suddenly found himself in, Rabbit runs off to find good-time girl Ruth, introduced to him by his old basketball coach Tothero. She’s not a prostitute or escort exactly, but still a girl willing to take $15 from Rabbit, "for light and gas," as he says chivalrously. Of course everyone knows what transaction just went down; but did Rabbit really think he was paying to get out of his married life? That it'd be so easy? What could Ruth possibly offer him? Of course this good-time girl will represent another threat to his restless nature, especially when he finds out she doesn't believe in God. Even poor drunken Janice knows there's a God!

Jack Kerouac's epoch-making On the Road was published only a couple years prior to Updike's book, and these two works illuminate the typical male urge to flee, and both works provide a nice little dialectic about men on opposite sides of the social divide on the late '50s and early '60s. 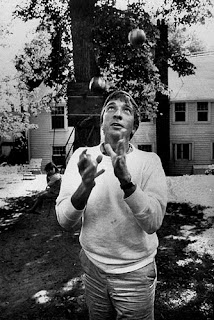 While Rabbit Angstrom could never in his entire life ever be as cool as Dean Moriarty or even the tagalong Sal Paradise, not stuck in a blue-collar western Pennsylvania town still dreaming of his high school basketball glories as he is, he does spend long hours early in the novel driving through that fabled American night. But instead of listening to Bird and Miles Davis on late-night radio, Rabbit is listening to "supper music, music to cook by": Connie Francis and Henry Mancini. Instead of envisioning how prose can replicate the leaping jittering notes of a jazz musician riffing, Rabbit "imagines himself about to shoot a long one-hander; but he feels he's on a cliff, there is an abyss he will fall into when the ball leaves his hands." Updike has indeed stated he meant Rabbit, Run to be a response to On the Road (I swear I didn’t know this when I began this post!), even though he hadn’t read Kerouac’s book. 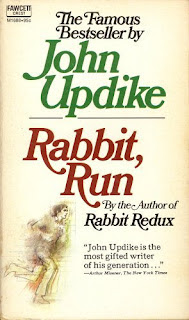 Updike's writing can get a little stuffy, not surprisingly in the realm of sex; there are some “graphic” sequences that Updike has said his publisher was squeamish about. The book was published, of course, in the days when books like Lady Chatterley's Lover and Tropic of Cancer were still quite literally banned in the USA--but Updike does find some mileage in sexual in-explicitness: poor Ruth ruminates "[Men] wanted some business their wives wouldn't give, in from the back which she didn't mind it was like being a hundred miles away once you get adjusted, or with the mouth. That. What do they see in it?" Or how about, “He feels underwater, caught in chains of transparent slime, ghosts of the urgent ejaculations he has spat into the mild bodies of women.”

Jack Eccles, a young Episcopalian pastor from the neighborhood, finds something to salvage in the Angstrom’s strained marriage, but his noble efforts cause strife in his own. His wife dismisses Eccles’ sympathy, feels it impedes on his feelings for her, and indeed, mocks his faith, mocks his notion that even a bad marriage is still a sacrament. Rabbit and Eccles wife meet several times in an awkward ballet of misunderstandings and misplaced desire. In the end, though, despite pregnancy, reconciliation, death and an open final confrontation with Ruth, it is Rabbit’s old coach from high school, Tothero, who has any wisdom to impart: “Right and wrong aren’t dropped from the sky. We. We make them. Against misery. Invariably, misery follows their disobedience…” 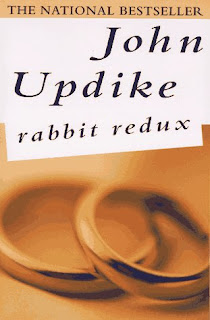 I’m sold now on Updike and Rabbit Angstrom, excited and intrigued by his sometimes obtuse, sometimes supple, sometimes glorious prose, and already am scouring used bookstores and eBay for a nice vintage copy of the 1971 continuation, Rabbit Redux. And Roger’s Version from 1986 looks really good as well, the story of a college professor whose student tells him he can prove the existence of God with a computer program. 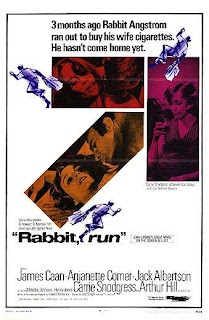 Rabbit Run was made into a movie in 1970 with James Caan in the title role, but it’s not even available on VHS. Ha, imagine, Sonny Corleone a skittish husband. Wonder how that turned out?

Posted by Will Errickson at 6:18 PM