Boxing the Compass: Crime Classics of the Early '70s

There's just nothing else like 'em. These really aren't up there with Chinatown, The Long Goodbye, Mean Streets, or Night Moves, but they all have that realistic, mundane, day-in-the-life-of-crime vibe that reached its apotheosis in Goodfellas, Pulp Fiction, and The Sopranos. Respect. 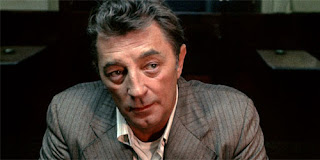 Robert Mitchum's performance here as the titular criminal is masterful as he tries to escape his fate; his wheeling and dealing isn't the work of a master con artist—even though it may seem that way at first—but the frantic scramblings of a man who knows he's doomed but can't admit it to himself. Who could? Caught between the Irish mob and the Feds and one seriously low-level gunrunner, he does everything he can to avoid another trip to the big house. The way this one plays out is pure '70s grit. Terrific Boston locales too. I suppose the only odd thing here is how a man of Mitchum's age could have kids barely in grade school. This was recently released on a Criterion Collection DVD. 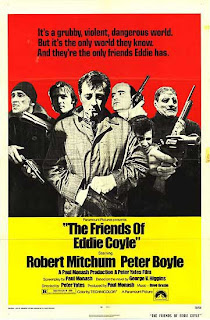 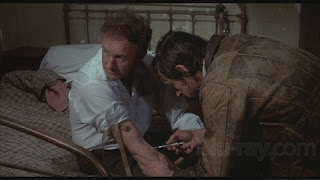 Since the original French Connection swept up the major Oscars in '71 a sequel was practically a foregone conclusion. Missing the estimable Roy Scheider (lost at sea with Spielberg and co. for Jaws) FCII might not boast his and Hackman's buddy routine and the New York mean streets, but it has a harrowing forced addiction/detox sequence and parts of Paris the tourists never see. Hackman pushes Popeye even further in his single-mindedness, although he still takes the time to get drunk (in a hilarious scene with a French bartender) and try to pick up hot French chicks. The climactic shootout with Charnier (Fernando Rey), the bad guy from the original, is terrific, and the final shot reduces the action movie to its barest essential. The poster doesn't lie. 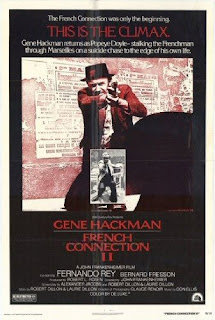 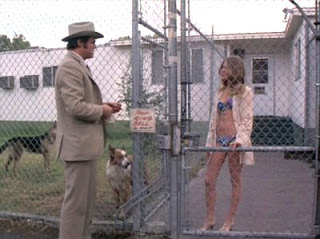 This character-driven heist-gone-wrong piece is best known today as the origin of a line from Pulp Fiction ("a blow torch and a pair of pliers"), Joe Don Baker's hired killer Molly who seems to be an inspiration for Chigurh in No Country for Old Men, and this unexpected exchange between Varrick (the estimable Walter Matthau) and a willing lady:

Charley Varrick: I like your bed. You may find this hard to believe but I've never slept on a round bed.
Sybil Fort: Is that so?
CV: What's the best way? North, south, east, or west?
SF: That depends on what you had in mind.
CV: What I had in mind was boxing the compass.

Walter Matthau makes a dirty double-entendre?! Probably his best one since "It took me three hours to figure out that 'F.U.' was Felix Unger!" 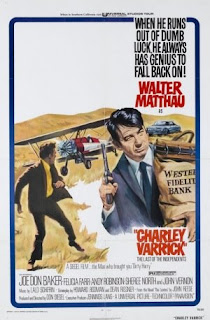 Bring Me the Head of Alfredo Garcia (1974, dir. Sam Peckinpah) 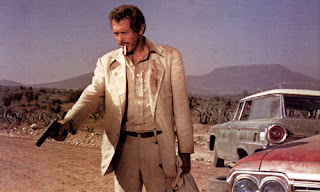 Reviled by many, considered by some to be Peckinpah's masterpiece, this existential modern-day western Mexican manhunt features the always-welcome Warren Oates. It revels in cruelty, grunginess, misogyny—indeed, misanthropy—slow-motion death, and some terrific lines. Shoving off goons hanging around a cemetery: "Don't look at me with your goddamn fuckin' eyes!" To an already-dead body as he shoots it: "Why? Because it feels so damn good!" And to his prostitute girlfriend who objects to gathering up the head of a man dead and buried: "The church cuts off the feet, fingers, any other goddamn thing from the saints, don't they? Well, what the hell? Alfredo's our saint. He's the saint of our money, and I'm gonna borrow a piece of him." Apparently when Oates saw Tom Waits on TV in the mid-'70s, he exclaimed, "That guy stole my act." He was probably speaking of this scene:

Also contains the classic bit, perhaps a cinematic anomaly, of trying to kill crabs with tequila. Yes, those kinds of crabs. There is nothing Warren Oates cannot do. Respect. 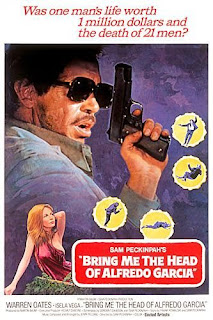