More Netflix Instant '70s: Last Embrace, The Manitou, and The Last of Sheila 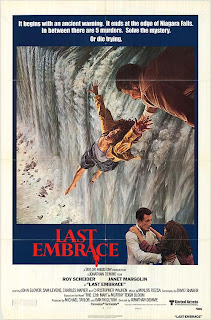 Last Embrace (1979, dir. Jonathan Demme) Unavailable on DVD, this suspense thriller plays like minor Hitchcock, complete with obsessive love for a dead woman, a convoluted mystery stuffed with red herrings, a swirling romantic score, and a climactic chase at a national monument (here, Niagara Falls). I sought this one out as a missing piece of Scheider's '70s filmography, and while he's always good - especially his retelling of his wife's accidental death - and his uptight wiriness makes for a perfect kind of spy, I'm not so sure how well he does as a romantic lead. The late Janet Margolin, previously one of Woody Allen's exes in Annie Hall ("Alvy, there are people out there from The New Yorker; My God, what would they think!"), simply isn't femme fatale enough, but damn if she doesn't have one of the most femme-fatale-istic scenes this side of Lady Frankenstein. Chris Walken and Charles Napier show up for some good moments of threat and malevolence as part of the unnamed governmental intel group Scheider works for. But the movie's too vague in the storyline clinches, Demme's direction is busy but unfocused, and overall it leaves you, more than a mystery should, wondering what just happened. Still, if you love Marathon Man, The Conversation, The Parallax View, The Odessa File, and others of that kind, Last Embrace should be an evening's '70s diversion. Especially Scheider's sartorial choices. 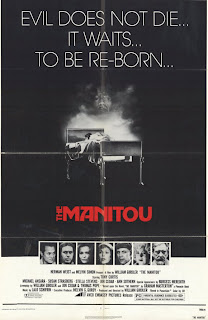 The Manitou (1978, dir. William Girdler) Girdler also helmed '70s trash like Grizzly and Day of the Animals, but it's a disappointment that he gutted the insanely fun Graham Masterton novel, which had all the elements that should have made this film a classic of the era. Tony Curtis is way out of his league, as is Susan Strasberg - yes, of the famous Strasbergs - although I daresay Burgess Meredith knows his way around claptrap of this kind. Campy and junky, it's a mash-up of other occult thrillers of the day but without the novel's sense of tasteless fun. An improbable villain that works well on the page but not really on-screen - that is, a three-foot tall Native American entity known as Misquamacus - the movie never quite feels whole or convincing; it just lies there going through Masterton's motions but not building up the incredible suspension of disbelief necessary. Extra points, though, for the cheap Star Wars ripoff FX at the space-age climax, Curtis referring to the villain as "Mixmaster," and the stupid postscript note as credits roll. You could pass on this, though. 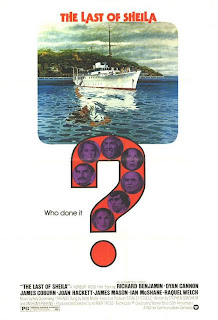 The Last of Sheila (1973, dir. Herbert Ross... okay, this was on Instant Watch when I first wanted to watch it, but it went back to DVD-only) Now this, this is what I dig in a '70s flick: vintage cast, vintage duds, memorable characters, sharp dialogue, knowing script, effortless direction, and lots of drinking. This is how Hollywood entertains royally. All-teeth movie producer maniac James Coburn wants to settle the score of his wife Sheila's hit-and-run death a year earlier and invites suspects/friends for a Mediterranean cruise on his yacht, named of course Sheila. Who gets the invite? Scorchingly-hot actress Raquel Welch, mustachioed screenwriter Richard Benjamin, stiff director James Mason (complete with nods to Lolita), non-Deadwood-aged Ian McShane (about the time he was squiring Sylvia Kristel; jealous much? Yes); and the charmingly vulgar Dyan Cannon, agent. Coburn sets up a mystery game to be played at different ports where clues must be collected. Except shit starts to get real, and everyone's got a motive. With a stellar screenplay by odd couple Stephen Sondheim and Anthony Perkins, The Last of Sheila is prime '70s film joy; both a spoof and celebration of classic Agatha Christie-style whodunits. Pay close attention to every clue and every quip; not knowing just what the eff happened at the end means, wonderfully, you just have to watch it all over again.

Posted by Will Errickson at 10:58 AM No comments: