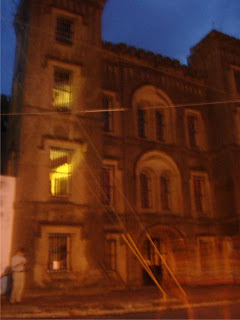 On a recent late August evening I visited the in South Carolina as part of a package tour. The building is of course protected by a builders’ society and whatnot; its upkeep is limited to what will make it safe for tourists. It's billed as being haunted, and forms a cornerstone of the booming "haunted Charleston" tourist biz. Why haunted? Because it's old and creepy and lots of horrible things happened there. You know how it was, long before concepts like "human rights" and the outlawing of torture (although you'd be forgiven if you doubted the actuality of the latter) informed American society. 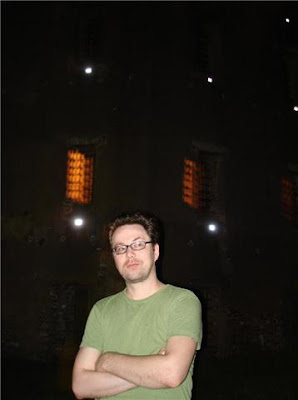 I don’t believe in the supernatural. In fact, such a thing is a flat contradiction in terms and cannot exist: if something exists, it is real and therefore natural. Nothing can be above or beyond the natural world.

Ultimately the supernatural does a disservice to reality and to the human imagination. Horrible things happened in this jail and places like it (the Amityville murders being perhaps the most famous American "haunting"), but the only way to keep us interested in them is to slop on a coat of ghosts and creepies and flying bricks and bleeding doorways. The terrible warden, who tortured for fun and profit, is said to haunt the jail, smoking his pipe and leaving the scent of tobacco wafting about. So--what? Pipes and tobacco can be ghosts, too? (Although this warden went missing one day and was never found. Well done, fate!) 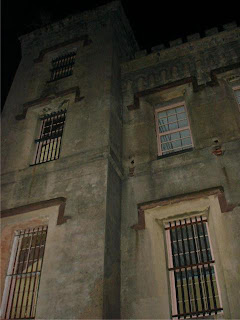 People will always want their ghost stories, but it seems that the exploitation of horror takes precedence over understanding what drove these people to do what they did, or to contemplate the finality and surety of their lives.

If ghosts exist, then one day they will be quantified by science. If they exist they are natural. But as it stands they are all hoaxes and misunderstandings, the results of the human mind’s many failings, its desire to impose structure, to see patterns, to see human faces, in the seeming randomness of nature. It bears repeating: we impose patterns over the terrible chaos that is life; we refocus and refocus so that our POV is of years and bodies and emotions, not of quarks and supernovas and misfiring synapses. 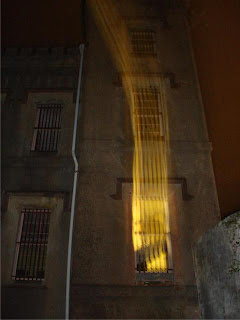 I can’t deny there was a creep factor to the jail, but you can find this in any old structure that drips with age and decay, with rusted iron fixtures and imposing steel doors. Shirley Jackson and H.P. Lovecraft, perhaps the two greatest horror writers of the 20th century, understood this; age and loneliness terrify us. As for me, the only chill I felt was within myself when hearing of the wretched crimes of both those who were imprisoned there, and of those supposedly in charge. 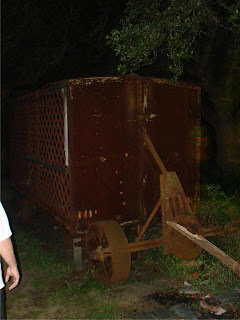 Why in the world would a person’s ghost haunt the place of its gravest and darkest days? It doesn't; I think it’s the psychic toll places like this take on our imaginations now, today, long after the deed is done. We need our ghosts to float these iron stairwells to let us know that once something terrible is done it cannot be undone. Does anyone ever hear of happy lovers haunting a romantic enclave at sunset on a tropical beach? No, because we need nothing there to expunge us of our guilt.

The dead don’t haunt us. We haunt ourselves. 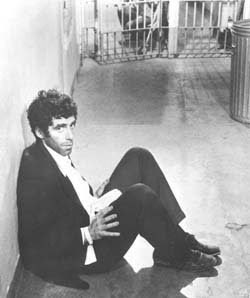 Two Friday nights ago I settled in with a nice bottle of Evan Williams, a lady friend and the DVD of Robert Altman's The Long Goodbye, his 1973 adaptation of Raymond Chandler's famous crime novel. Iconic gumshoe Philip Marlowe, once the purview of tough-guy actors like Bogart and Dick Powell, is here played by nebbishy Elliott Gould as a slovenly cat lover who is more likely to meander down the mean streets than saunter. 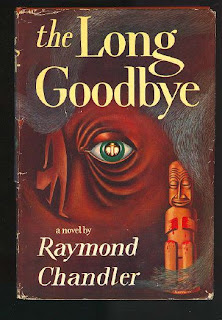 While I'd seen the movie once many years ago and liked it all right, watching it this time I found it stunning and captivating. Instantly it vaulted near the top of my favorite '70s movies (hallowed ground for me). It’s damn near a masterpiece. As with most Altman movies, critics love to toss out the word "revisionist," since the movie reimagines the classic noir stylings in daytime and with a "sensitive liberal" type as the no-nonsense Marlowe. 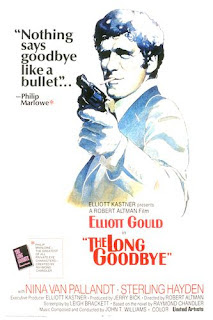 Upon first release it was a bomb, so after a few months United Artists went back and redid the ad campaign, highlighting its absurdist and iconoclastic take on the Chandler hero, best illustrated by this new poster, by MAD magazine's Jack Davis. 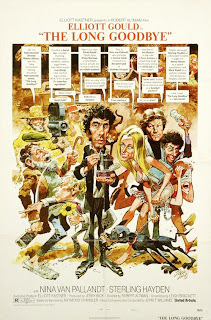 What of the plot, you say? Apparently Altman and co. jettisoned a good chunk of the novel and reimagined Marlowe as a "Rip Van Winkle" who falls asleep in the '40s and awakens in the '70s. So the movie begins (after the odd fanfare of "Hooray for Hollywood") with Gould stretched out in bed fully clothed, awakened by his cat, and then goes on the search for cat food. Later Marlowe's friend Terry Lennox pops in at 3 a.m. with bloody knuckles and asks for a ride to Mexico. Marlowe obliges, and this sets off an immediate interest in him from cops and crooks. Did said friend kill his wife? Abscond with a goon's money? Have something to do with the disappearance of a famous writer, a bearded, larger-than-life Sterling Hayden (Capt. MacCluskey in The Godfather, Spielberg's first choice for Quint in Jaws)? 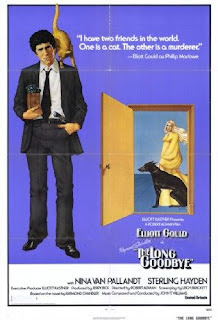 A few of my favorite things: listen for the theme song (music by John Williams, lyric by Johnny Mercer, who of course wrote "Hooray for Hollywood") again and again, replicated throughout the movie as muzak in a supermarket, performed by a mariachi band in Mexico, tinkled in ivory by a desultory pianist in the bar where Marlowe gets his messages ("Why can't I get my messages in a bar?" I exclaimed to the lady watching with me. Forthcoming answer was unsatisfactory.) Watch for deceptively unthreatening gangster Marty Augustine, who wields a mean Coke bottle. Check out the beachfront party scene in which diminutive Henry Gibson (one of the Illinois Nazis from Blue Brothers that Belushi hated so much) terrifies the blustery Jack Daniel's-brandishing Hayden into paying him the $4,000 Hayden owes. 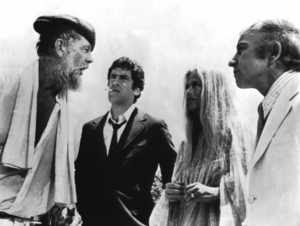 These might be the movie's best scenes, Hayden's character's home (Altman's own). Behind them the ocean beats an endless surf beyond the machinations of men and women. It literally traps Marlowe in it at one point; our mortal problems nothing to the might of the sea. A dog comes running with a cane, a sad postscript to suicide. One of Gould's best scenes is a convincing drunken diatribe against the useless cops that hound him. But this Marlowe is a chump, cut off at every turn, going with the flow ("It's okay with me," he cheerfully mutters over and over). We will come full circle, of course; the film's climax is welcome and satisfying. Hooray for Hollywood indeed! 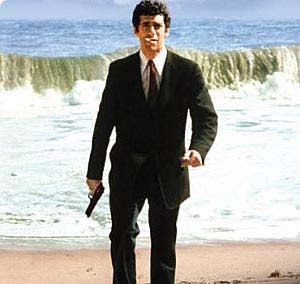 In one of those nice little coincidences, there's an Elliott Gould film retrospective being held in NYC right now; the New York Times had an interview with him the other day, and he's doing his Q&A after Goodbye. Cool. Too bad many of the movies being shown are not on DVD. Not on DVD?! They still have that?

Posted by Will Errickson at 2:05 AM 6 comments: 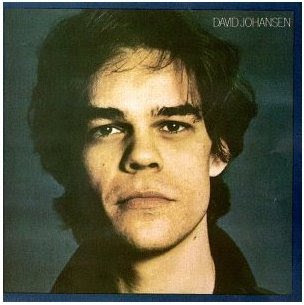 After the breakup of the New York Dolls in the mid-70s, singer David Johansen released his first solo album in 1978. It's been out of print for ages, and I've been waiting for somebody to re-release it, and lo and behold this year that's what happened. Let me tell you what: this is one rockin' album, maybe even better than the Dolls' second, Too Much Too Soon. It's rife with all that smart-ass charm and Noo Yawk attitude Johansen wielded so well, plus some classic '70s production--you know, lead guitars squealing out of your speakers over chugging rhythm tracks, thanks to Johnny Rao and guest appearances from ex-Dolls guitarist Syl Sylvain and Aerosmith's Joe Perry. 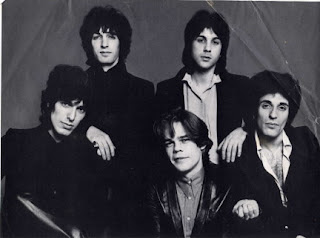 But there's also some serious girl-group and '60s soul going on here, from the Stonesy ballad "Donna" to the West Side Story-esque, the rather epic "Lonely Tenement." Vocally, I think the singer's in top form; he's rife with sass and humor and pathos and yearning. Johansen's voice always reminded me of Louis Armstrong, crossed with a Hanna-Barbera cartoon character whose name I can't remember, am I right? 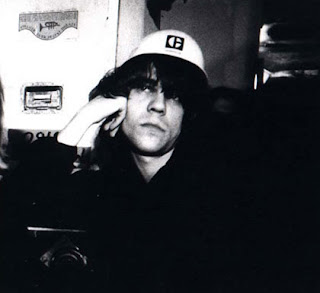 The opening track is perhaps his most famous solo song, "Funky But Chic," and sets the tone and 'tude for the rest of the album in the same way "Personality Crisis" introduced the first Dolls album in '73. "Funky funky but--oh chic!" Hilarious. If you'll recall, chic was a big word in the '70s. So was funky. Great choruses on "Pain in My Heart" and "Not That Much" ("She said, 'I'm in love with you daddy/But not that much'"). "Cool Retro" is good but a bit diminished somehow; Joe Perry's guitar seems mixed down--on purpose?! I'm sure it was a rave-up live, maybe down at Max's Kansas City or the Bottom Line.

Girls, he likes 'em hangin' around
If you're DJing some dingy bar you could throw any track on and skip nary a beat; sitch a track between some vintage Cheap Trick or that solo album from Ace Frehley. Perhaps some Ronettes and Shangri-Las along with old-school Aerosmith, or follow up the Johnny Thunders solo masterpiece "You Can't Put Your Arms Around a Memory" with the equally awesome "Frenchette." Syl Sylvain co-wrote this last song, which starts off as a pretty piano ballad but turns into a tough rocker with a real girl-group vibe. Love the lyrics: "You call that lovin' French but it's just Frenchette/I been to France... It's just like all your leathers baby/They don't scare me, I know it's only leatherette." As a suffix, -ette was big in the '70s too, if you'll recall, and David Jo scores off all of 'em, using the pretenses of a suitor as an excuse to not get serious--"I can't get the kind of love that I want, that I need... so let's just dance." Really. Always good advice.

And here's a gorgeous and blistering "Frenchette" from MTV's 1982 New Year's Eve Party.

Posted by Will Errickson at 4:30 PM 4 comments: