Over at Shoot the Projectionist there's a poll to determine the top 31 Films that Give You the Willies. By October 28, after all participants have whittled the 183-movie list down to just their 31 (why 31? Um, 31 days in October?) favorites, the final tally will be made for the ultimate willie-inducing 31. Sounds an heroic task, but one well-worth embarking upon. After years of Netflix I'm pleased to report I've seen even the more obscure titles, and I have to say most of the other nominees are right on the money: The Haunting, The Innocents, Blair Witch Project, The Changeling, The Others, Deep Red. 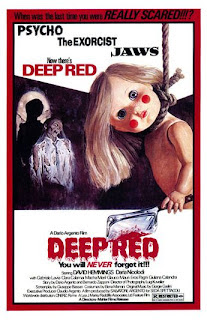 These aren't outright horror films, like Texas Chainsaw Massacre or The Descent (although these are on the list as well), but quieter, chillier movies that try to get under your skin rather than flay you alive.

First, however, a handful of films on my list that didn't make it to the final cut: 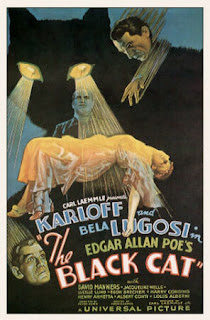 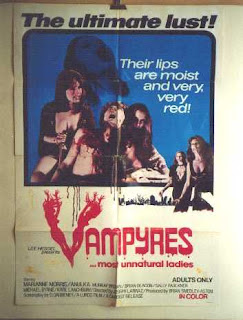 One of the most unsettling films I've ever seen is ineligible because it was a TV movie (produced by the BBC for British telly), 1984's Threads, a gut-wrenchingly realistic account of a nuclear holocaust; also ineligible were 1979's Salem's Lot, 1990's It, and 1975's Trilogy of Terror, all which have superior creepy moments (however, none can keep it up for very long) and all made for TV.

So, my 31 top picks, in descending order: 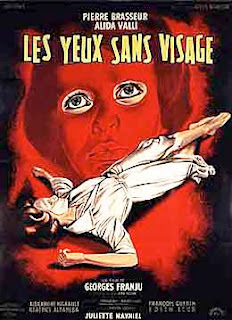 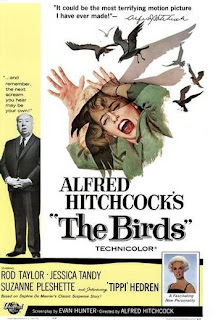 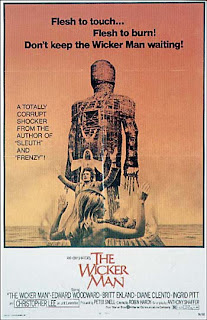 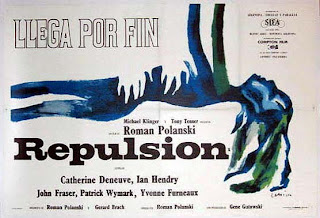 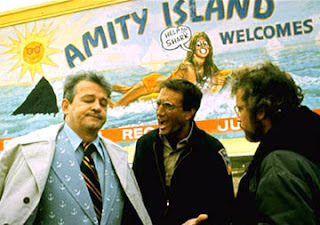 Yeah, you knew that was coming, didn't you?

The Physical Impossibility of Death in the Mind of Someone Living

(photograph by Robert Caplin for The New York Times)
Peering into the open jaws of an enormous man-eating shark and contemplating the eternal struggle to survive, to consume; indeed, the insatiate maw that awaits us all? Now that's what I call "modern art." That whole thing about "questioning the relationship between viewer and art"? It can go fuck itself.
Posted by Will Errickson at 1:56 PM No comments: 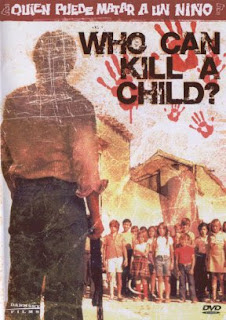 Who Can Kill a Child? (directed by Narciso Ibáñez Serrador, 1976) is a quite good, if somewhat morally dubious, half-forgotten Spanish thriller that combines elements of The Birds, Children of the Damned and Night of the Living Dead to unsettling effect. At heart the film is a work of exploitation, I suppose, but it's photographed so well, the score is so eerie, and the pacing is so leisurely yet appropriately suspenseful that it could pass for a more "respectable" work. It truly does ask the titular question, and it gives a clear answer: anyone. All of us.

This is made abundantly clear in the opening credits, which alternates the humming and laughter of children with images of war atrocities (the Holocaust, Korea, Vietnam, etc.) in which children were the victims. This goes on for more than five minutes, and it's rather disconcerting and a bit disingenuous, as the same point is made later in the film within its narrative. It seems the filmmakers were trying to add a moral weight to the movie; instead, they nearly turn off the viewer within the first couple moments. Overplaying their hand, as it were.

Two vacationers, a man and his pregnant wife, visit a bucolic island off the coast of Spain but find it inhabited only by children. Lots of them. And you know awful children are. So you know where this is going. And it gets there. And there is one sequence that wouldn't have been out of place in David Cronenberg's early masterpiece The Brood. The scenes of children silently amassing just out of the sight line of some of their victims is lifted right from The Birds, but it works. There's a real sense of foreboding and imminent doom throughout that I found gripping and believable. But you might want to fast-forward through the opening credits, that would be my advice. 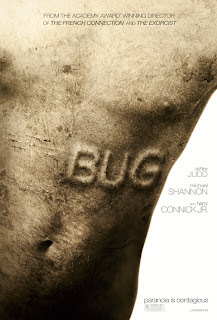 Bug, directed by William Friedkin (The Exorcist, Sorcerer) mercilessly reveals the horror of schizophrenic insanity. The film coalesces into a perfectly rational madness, the apogee of which is reached in two perfectly realized and performed monologues of (quite literally) conflagrant paranoia, conspiracy and enormous, but seemingly possible, leaps of logic. These monologues reveal the lengths to which not only “crazy” people will go to justify their irrationalities, but sane people as well who are simply better equipped to compartmentalize their conflicting beliefs. Who sounds as rational as the perfectly insane, armed with a quick wit and a vast store of knowledge, plus a bubbling cauldron of misfiring synapses and nerve endings fried from flesh stripped to bleeding?

Ashley Judd, known mostly for nondescript thrillers with titles like Double Analysis or Secret Jeopardy, gives an amazing performance as Aggie, a broken-down woman with a taste for the lowlife. Bereft of child and spirit she is poised and ready to drink the Kool-Aid that Peter (Michael Shannon), a damaged young war veteran, offers in the form of a supposed insect intelligence he suspects lurking in the motel room they come to share...

I thought Bug was terrific, with truly cringe-inducing scenes of bloodshed and tooth-cracking dentistry with convincing actors fully inhabiting their roles in the limited setting. Friedkin directs with a sure and smooth hand, letting Judd, Shannon and even Harry Connick, Jr., do the heavy lifting. Claustrophobic in the best (?) sense of the word, Bug tightens the screws until the very end. Somehow, though, the movie disappointed lots of critics, as it got a "Rotten" tally from Rottentomatoes. 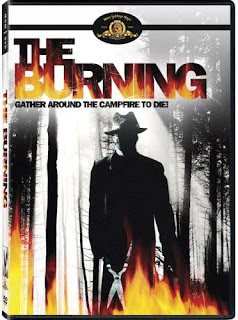 Newly released on DVD, 1981's The Burning is a slasher flick in the Friday the 13th mold, with a campground serving as the killing fields for a vengeful psychopath and a bunch of teenagers impaled with garden implements. Don't let that turn you off. There's a little more here than your average '80s horror cheapie; while it's certainly not a great, or even very good movie by any standard, it does have a moment or two of nicely realized horror, and to my utter delight and shock, one of the coolest massacre sequences in any slasher movie of the era.

While the villain seems to be your standard psycho killer, well-known from stories told around the campfire, who's out for revenge (this one was the drunken camp caretaker who oh-so accidentally gets set afire in a practical joke gone horribly wrong. Oops, damn, my bad, dude!), it turns out that “Cropsey” is an actual campground legend from the 1970s in upstate . The special effects were done by the master himself, Tom Savini, who quite rightly states in one of the extras, “If you watch any of the Friday the 13ths after the first one, you’re stupid.” He turned down the first F13 sequel to work on The Burning, showing eminent good taste and judgment.

What I find rewarding about movies like this, movies forgotten, overshadowed by more popular, but inferior, pictures, is how they open and reveal unexpected little historical connections. While so many other horror movies of the era were made by a production team of unknowns and starred nobodies, then sank without a trace with no way back to relevance, The Burning actually has some pedigree. It was the first film produced by Miramax, the famous independent production company run by the legendary Weinstein brothers Harvey and Bob. You get a handful of soon-to-be stars like Jason Alexander and Holly Hunter (I wouldn’t exactly call Fisher Stevens a star, but he was married to Michelle Pfeiffer at one point) and that guy who played Ratner in Fast Times at Ridgemont High. 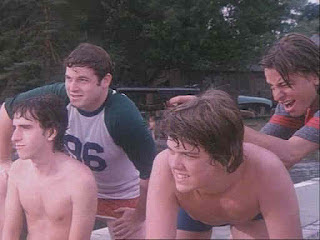 There’s character here—not characters mind you, but identifiable kids who are a bit more than just Cropsey fodder. There are the usual smirky teens and bullies, and the always-unpleasant specter of misogyny (although this is more because these films are the emotional equivalent of confused 13-year-old boys; I don't think it's misogyny so much as pure obliviousness) , and the requisite naked teenage girls. But several of the guys, like Alexander and Stevens, are a likable, dorky bunch with Alexander getting in some bad but charming one-liners and impressions. And a couple of the girls are quite cute in a nerdy, innocent way. In fact one or two are obviously pre-teens, and their hysterical reactions to the horror later on is more disturbing because they're children. Three of the girls who die engage in no sexual behavior at all, far from the norm for slasher movies. But kind of like real life, huh?
As for that one great murder scene I mentioned above, I'm dying to give it away, but I'm certainly not big on spoilers. Suffice it to say it was enough of a brutal bloodbath (at the time) to warrant the film becoming one of those infamous British "video nasties" that plagued the U.K. in the mid-1980s, which resulted in censors cutting out various bits of gore and bloodletting. The Damned even had a song about movies like this. That's gonna be all I say on that, but I don't think you'll be too disappointed in the scene. I hope. 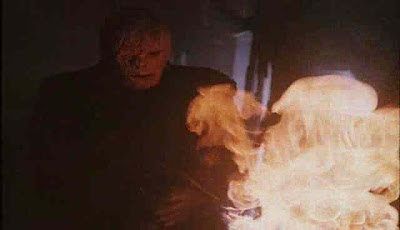 As I've never been a slasher movie fan--I prefer my horror more Gothic, more elegant, more perverse, more, well, erotic--I still have to say that The Burning was satisfying for what it was, offering several well-staged scenes of suspense, nudity and mayhem; a cool '80s synth score by Rick Wakeman (I refuse to link to anyone who was in Yes); one absolutely awesome teen slaughter sequence; and George Costanza, avec hair. 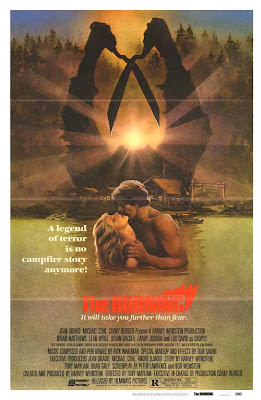