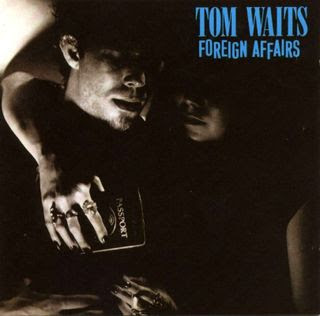 The Tom Waits album that completes my collection (pretty much besides some B-sides collections). Foreign Affairs, the fifth from the his late-nightness, occupies the same dingy romantic crossroads that earlier masterpieces like Small Change and Heart of Saturday Night did, a five-alarm pile-up of Raymond Chandler, Jack Kerouac, Louis Armstrong and Bernard Herrmann (I'm not linking to any of those guys; Jesus, people, if you need me to, yr readin the wrong blog). You got your upbeat-beatnik spoken-word hopscotch (titled "Jack & Neal," natch), your film noir track ("Potter's Field," complete with movie soundtrack-style orchestral backup), your melancholy last-call lament ("Foreign Affair"), your nostalgic tearjerker lullabye ("Sight for Sore Eyes"), and the Bukowski bar-narrative "I Never Talk to Strangers," probably the album's best track. Bette Midler (remember, she had some weird street cred in the '70s!?) stops by for a drink in this charming tune, one of my favorites of his songs--in short you get everything that Tom Waits did so well in the '70s. 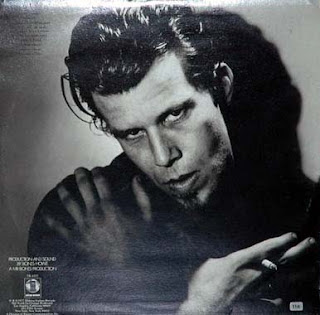 But in all honesty, there's nothing here as iconic as "The Piano Has Been Drinking (Not Me)," "I Hope I Don't Fall in Love with You," "On the Nickel," "Better Off without a Wife," or "New Coat of Paint", either melodically or lyrically. I'm not surprised he bailed on this style an album or two later; the Hoagy Carmichael-style piano tipplings and drunken-pun couplets were beginning to wear a little thin. There--I said it!

Soon he'd run off and join the circus sideshow band for the rest of his career. Everybody's got their own tastes, but I guess I like drinking to songs about drunks and diners and dives and dames and the vista of an America long gone than the kaleidoscopic dark carnival he's been doing since. Now don't get all huffy; I love Swordfishtrombones as much as the next hipster at the bar... it's just that I'm more likely to stumble out from it into the night singing "Wasted and wounded/It ain't what the moon did/Got what I paid for now..."


Posted by Will Errickson at 8:00 PM No comments:

Film criticism, sent to die, and an attempt at rescue 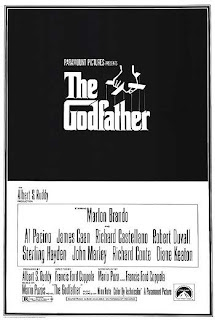 It's been said that the message boards at IMDB are where film criticism goes to die—and it’s largely true—but I think this little comment I left for some guy who “didn’t get” The Godfather is not so bad; and maybe, just maybe, this dude who insists that “Star Wars, Die Hard, Fight Club and Rocky are great movies,” will have a change of heart. I dashed it off at about 2 a.m. Sober, even!

"It wasn't until the third time I watched The Godfather that I finally, really and truly, got it. It touches on major themes that Americans love: that lowly immigrants can rise up and become powerful; they can stand up for their families and defend them the way they choose; they revere honor and duty and loyalty. But in the end, it's a complete scam. Oh, bitter irony! It's also about fathers and sons, and the expectations they have of one another--how can one not be touched, watching poor hapless Fredo weep in the gutter next to his father's bullet-riddled body?

"I love the little detailed moments: how upset Brando is when he's home from the hospital and Sonny and Tom are afraid to tell him what happened to Michael; the way the camera imperceptibly moves toward Michael as he tells the guys what his plan is for Barzini and MacLuskie; the tension that builds when he's in the men's room looking for the gun as the train roars outside; the banter between Tom and the producer Woltz ("Let me tell you something, my Kraut-Mick friend"); the way Sonny bites his hand when he finds out Carlo is beating up Connie; Appolonia's gorgeous breasts; the black humor of the assassins: "Leave the gun... take the cannoli." And the entire wedding scene that opens the movie, and how innocent and above it all Michael seems when he's with Kay... and how he too will soon be as rotten as the rest of the family, giving lie to his words: "That's my family, Kay, that's not me." 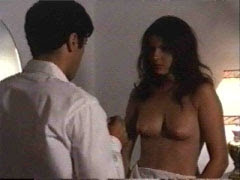 "I love the stately manner of the burnished color scheme, the browns and yellows, the darkened rooms, hinting at behind-the-scenes machinations; the mournful Godfather theme song that weaves its way throughout the picture; the editing that reveals Don Corleone's visage behind every act of criminality (the slow fade-in to his implacable face as Woltz's screams from his bed fade away). Everything is in its right place, logical, precise, yet not overbearing or obvious.

"No, I didn't get this all on first, or second viewing. I've seen the movie a dozen times and each time something different pops out at me, something that was always there, something rich and true about not just gangsters' lives, but about people, families, lovers, enemies. And that final scene, showing Michael shutting off his heart forever, betraying the man he once was--as Moe Syzlack put it, 'And then Michael closes the door on Annie Hall.' 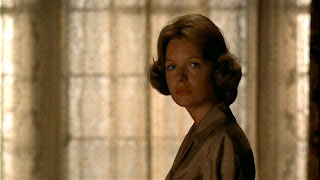 "But then, that's just my .02 on one of the greatest movies ever made."

Posted by Will Errickson at 1:53 AM 3 comments:

Labels: movies, movies of the '70s

While the entire nation seems utterly incapable of doing anything but ejaculating over the new Batman movie (it's #1 on the IMDB Top 250 movies?!) I myself am more taken with the trailer that comes with it: the long-awaited movie version of Watchmen, the seminal 1986-87 miniseries "graphic novel" by Alan Moore and Dave Gibbons (which is near the top of Amazon's bestseller chart). 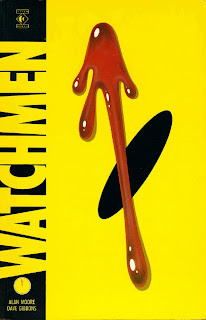 According to many reports, director Zack Snyder (he of the not-too-shabby Dawn of the Dead remake and the I-have-no-interest-at-all-in 300) has attempted a faithful adaptation. The trailer looks phenomenal and easily gave me an anticipatory thrill. And it includes my favorite bit of dialogue from the comic: Rorschach (longest-comeback-ever nominee Jackie Earle Haley!) intoning, "The world will look up and shout 'Save us!" and I'll whisper, 'No.'" 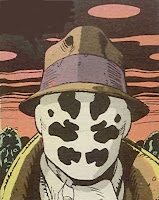