A Criminally Canadian Christmas: Elliott Gould in The Silent Partner (1978) 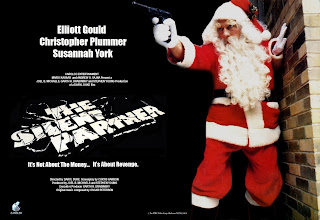 With the tiniest hints of Hitchcock and, in one shocking moment, of the Italian giallos of Argento (see the broken glass over the title), The Silent Partner is a movie virtually unknown to, well, everyone. Set during Christmas 1977, the set-up is one we've seen before (which is fine with me): an everyday guy, Miles Cullen (Gould), who ends up in facing down a criminal mastermind. Cullen's a go-nowhere sorta fella working a boring job at a bank in a shopping mall with a little crush on his obnoxious boss's mistress, coworker Julie (a delectably bright-eyed Susannah York). 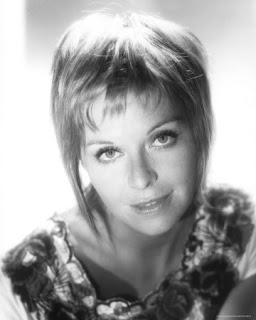 Cullen's other coworkers include an impossibly young John Candy and his improbably nubile girlfriend, a Suzanne Somers-type blonde who wears tight-fitting t-shirts that have cutesy bank-related phrases on them like "Early withdrawals penalized" and "Bankers do it with interest" (what, no "Night Deposits Welcome"?). Lonely evenings are spent playing chess and collecting exotic fish--until Cullen discovers that the mall Santa, Reikle, (a fey, sadistic Christopher Plummer) is planning on robbing the bank. Only then Miles does spin into action: when "Santa" robs him, Cullen defrauds the bank (and therefore also Reikle) by keeping a portion of the stolen till for himself, and then stashes the cash in one of the bank's safe deposit boxes. 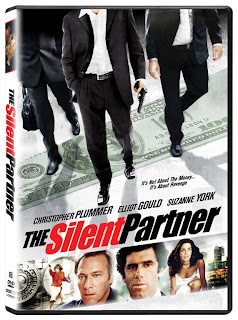 Of course, we movie fans know it's never that easy to escape the drudgery of everyday life, and while Miles attempts to woo Julie away from the boss, Reikle has seen him on TV being interviewed about the robbery. That cat-and-mouse game that follows resembles the chess games Cullen challenges himself with but turns far deadlier as he realizes he and Reikle are inextricably entwined in their criminal tête-à-tête. 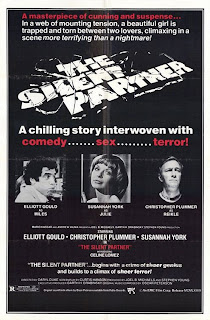 This is a film made in Canada that, oddly enough, is actually set in Canada. Despite some stellar reviews on Amazon and in some blogs I ran across, it's hampered by its sometimes dull, dry delivery. Moments of black humor and morbidity crack the surface, as well as moments of almost Scorsesean violence, but director Daryl Duke, going by his IMDB entry, was a journeyman workhorse TV director and you can certainly tell that. The screenplay (based on some long-forgotten Danish novel), however, is by Curtis Hanson, he of the masterful L.A. Confidential. This is the second time in recent months Hanson's screenwriting credits have suprised me (at Halloween I learned he also adapted Lovecraft's "The Dunwich Horror" in 1968). 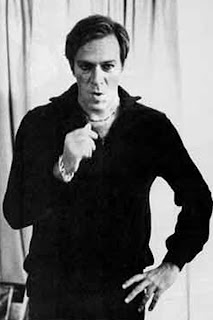 Plummer as Reikle, not dressed as Santa or woman

Gould has none of the smart-alecky, rubbery-faced charm and playful subversion he did so well in The Long Goodbye and the fantastic California Split, but that wouldn't fit Miles Cullen. In the couple scenes that he really shows emotion--panic in one and disgust in the other--the movie comes alive. A romantic evening between him and York is quite believable. The dreary daily grind of his life comes through, but I would've appreciated more of the Gould that was so prevalent in the '70s. But I suppose Cullen has to play it cool; he's got cops and Julie and his boss and a psycho-criminal and soon, the mysterious and exotic beauty Elaine, (Céline Lomez) sniffing around his every move. 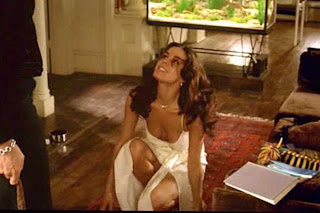 You really don't want to see what happens with that fish tank in the background.
There are some great '70s moments here: a tacky Christmas office party; dimly lit "affair" bars with tinkly jazz and pretzel bowls; Miles' bachelor apartment and Julie's "liberated woman" one. Oscar Peterson's score is dramatic and overt, adding much malevolence to scenes that, honestly, would have limped along without it. Plummer is his usual urbane bad-ass self, even in drag and a Santa suit, and Susannah York is classy and elegant as a woman frustrated by Gould's inexplicable behavior (uh, as in not fucking her when he gets the chance). Céline Lomez is quite sweet and yet tough as the beauty caught between Cullen and Reikle--to disastrous results. But, c'mon, you knew that right? Thrillers like this are, quite purposely, paint-by-numbers (or murder by numbers, if one is a Police fan). 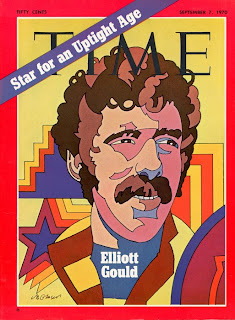 The Silent Partner came at the end of Gould's briefly brilliant career of the '70s; emotional insecurities as an actor and celebrity led to lack of good work and virtual unemployment through the '80s and '90s (until he returned as Ross and Monica's dad!). But I find Gould one of the most interesting actors of his age, perhaps even more so than Nicholson, Pacino, and DeNiro, simply because he could not make the transition from the personal films of the 1970s to the anonymous blockbusters of the 1980s and beyond. Perhaps one would do well to recall his famous words from his best role, as Philip Marlowe in The Long Goodbye: “It’s okay with me.” 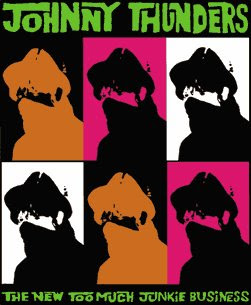 Johnny Thunders: man of taste, restraint, charm and good sense. (The New) Too Much Junkie Business contains some of what made Johnny good, some of what made Johnny bad, but little of what made him great. Originally released in 1983, this hodge-podge collection of songs--some live, some studio tracks--is too hit-and-miss and will really only appeal to full-fledged Thunders fans and completists. Even though it was co-produced by Stones' producer Jimmy Miller, it sounds like it was barely produced at all. 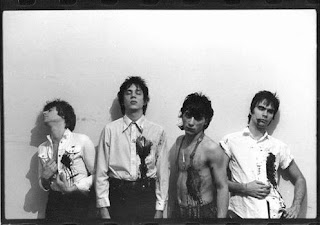 The CD starts as Johnny greets all listeners with a personal message, delivered in his hilariously slurred, druggy Noo Yawk twang: "Hey all you kids this ain't none ah that bootleg shit, this is da real thing," and then blows a sloppy snotty kiss at you. The opening track, "Who Do Voodoo," is just all right; the vocals are unclear so who can know what the song's really about. Voodoo, one assumes, but one must never assume with Johnny; you can pretty much guess "voodoo" is slang for "heroin."

Next up is "In Cold Blood," just marginally better, with a tough riff and a low-rent swagger that makes it enjoyable. "Just Another Girl" is all right--which Johnny calls, in a moment of sensitivity, "Just Anudda Bitch"--but like many of Johnny's songs, it's under-produced with too much bass. Still the guitar-work is inventive which is what you expect when it comes to Johnny. 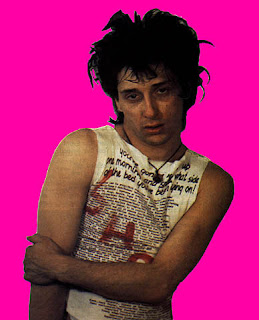 "Sad Vacation" is a live track from the Peppermint Lounge (not the original), a slow, bluesy lament for Sid Vicious (get the title? Johnny, what a cunning linguist) with some really absurd lyrics: "You're singing from your grave/It's so hard to do." What?! Did he say, "Singing from your grave"? What the heck does that mean?! I dunno, but it cracks me up every time I hear it. But Johnny's heart is in the right place, and it shows a real affection for that damned kid, so I'm going to let him slide. 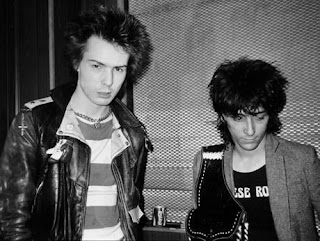 Too much rock and/or roll
"Diary of a Lover" is a pretty acoustic tune, although in the midst of it he blurts out "Girls, they fuck up your head." Charming to the last. Things pick up with one of the L.A.M.F. classics, "Get Off the Phone." Then the title track, a live sloppy rave-up with a great riff, admittedly stolen from Chuck Berry and Bo Diddley. To wit:

Your life becomes as sickening as that mess you call your face/
That pig you call your girlfriend, she's been in there for days/
Climbing up the walls, shot some on my balls/
Wrap it up, call it art/
Now your record's in the charts 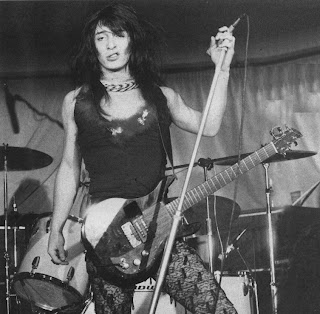 The sneer that launched a thousand punks
"King of the Gypsies" is '60s pop, sounds like it was recorded with a portable tape player, and features some kinda lame "gypsy"-like guitar wrangling. Johnny's self-pitying side comes out in "So Alone" and then we see once again what made Johnny good: a live version of "I Love You," a song I'm not crazy about but which is delivered here with passion and conviction. The CD wraps up with a couple of the New York Dolls' classics, "Jet Boy" and "Great Big Kiss." In the latter he duly insults both the audience and his female back-up singers. 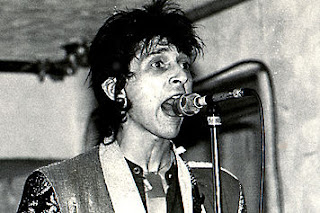 So like I said, Johnny Thunders: man of refinement and good taste. I know you died almost 20 years ago, but God love ya, Johnny, wherever you are.
Posted by Will Errickson at 11:57 PM 3 comments: 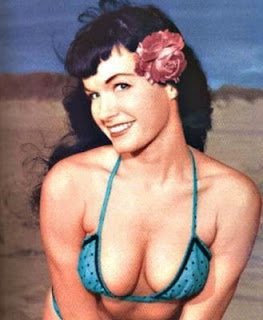 One of the icons of sexual liberation and counter-cultural retro cool has died. Bettie Page needs no introduction, does she? I was introduced to Bettie's loveliness when I was a teenager frequenting comic books shops in the '80s. Yum. Thanks for everything, Bettie! 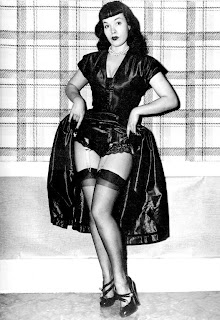 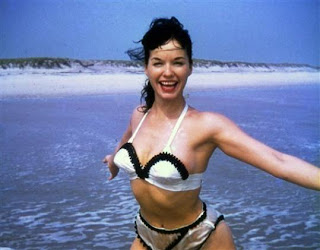 Posted by Will Errickson at 11:20 AM No comments: 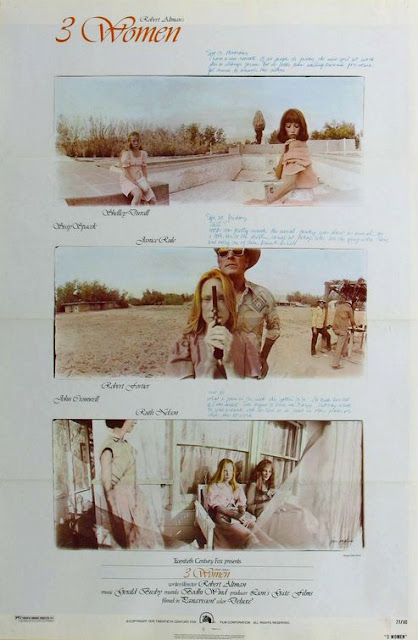 "I'd rather face a thousand crazy savages than one woman who's learned to shoot." Robert Fortier as Edgar Hart in 3 Women

Duvall as Millie Lammoreaux gives us a voiceover narration that in its dissociation and lack of affect reminds me, in a good way, of DeNiro's in Taxi Driver. Bourgeois, petty, and given to yammering at the mouth long after folks have walked off, utterly ignored by her neighbors, men and coworkers, Duvall gives a career-best performance as a nearly painful-to-watch loser. Too bad it's in this underseen gem. 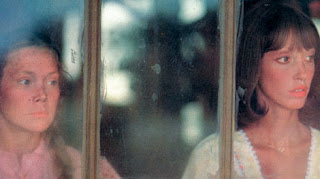 Coming off her Oscar-nominated leading role in Carrie (1976), Sissy Spacek stars here as another girl child, wide-eyed Pinky Rose (Freudian much?) who also seems to be repressing her raging id (yes). Eventually she will experience betrayal, trauma and rebirth, and reject her (impossibly old, impossibly still sexual) parents. Reborn, she threatens the now-unstable Millie in a whole new manner. 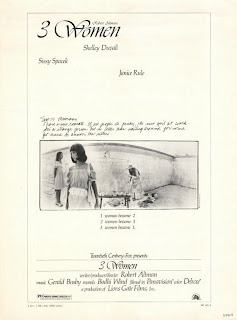 The only man of any significance is former stuntman/TV-cowboy stand-in (i.e., not a real man), Willie's husband Edgar Hart (Robert Fortier), who shoots blanks (ha-ha, get it?) with his old prop gun. Crude, leathery and macho, he insinutates himself into the women's lives... but at what price? I'll give you one hint. It seems he didn't always shoot blanks, for Willie is pregnant... 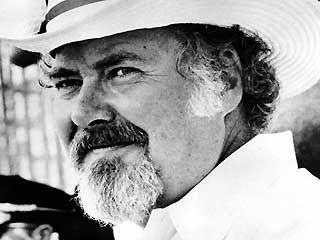 As always, Altman's camera slowly weaves across scenes, never quite settling in any one place, but giving us hints and allusions to characters' states of mind. Slows dissolves and flowing water, long takes of barren landscapes, flesh young and old, women with real guns and men with toy ones, life floating by as if a dream, Altman pictures a world of women dehumanized, and their imperfect struggle for power and selfhood, however fleeting or imagined. The haunting, slightly ghostly score by Gerald Busby seems fit more for a psychological horror movie--but then, perhaps it is perfectly suited. 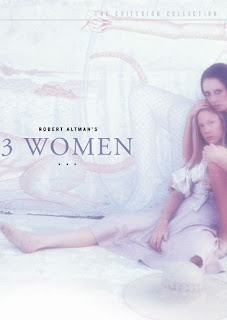 The Criterion Collection DVD has a commentary by Altman, who is always eager to recount the genesis of his movies (3 Women was based on a dream of his, with input from Duvall for her character's diary entries and voiceover) and fun stuff that happened while shooting. I listened to a fair amount but shut it off for a reason I'm sure he'd appreciate: I wanted to keep my impressions of the film pure and intact; a film so firmly subjective demands a personal response.

I was utterly captivated and moved and disturbed by 3 Women, not expecting when I sat down to find a film so allusive (and elusive), so monstrously mythic, and yet firmly rooted in the arid Southwest in the mid'70s. Overall the movie is reminiscent of both Ingmar Bergman and Roman Polanski--Bergman for its thorough deconstruction of personality and measured pace (Persona); Polanski for its chilling dreamlike tone that portends doom at any moment and threat of insanity (Repulsion, Rosemary's Baby), and because, in the end, I'm not sure if this is a work of overt misogyny or heroic feminism. Oh well - it's all Altman in the end.
Posted by Will Errickson at 5:49 PM 1 comment: