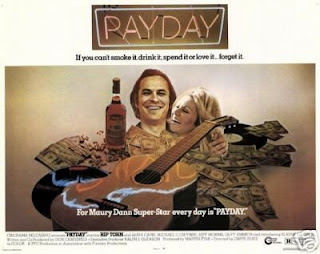 "Argh! Fuck y'all! I'm not public property!" So growls country star Maury Dann in the little-known 1973 character study Payday. A road movie taking place over two frenzied, pill-popping, Wild Turkey-guzzling, bird-hunting and groupie-fucking days, Rip Torn gives it his Method-acting best as the kind of man who knows he can create any kind of mess and his handlers will pick up the bill. "You're just a rich little child with a lot of toys," a woman tells him, but you've pretty much figured that out by that point. Payday invokes the madness of the road--if it doesn't quite achieve full-on insanity, it reaches a decent point of intoxication and sleepless edginess.

Dann is equal parts Hank Williams and Barnum & Bailey, but he's got the attributes reversed: he's not that talented in the art of country music but can certainly take advantage of all the suckers that surround him; he likes to get fucked up but actually might not be that great of an entertainer. Despite ostensibly taking place in the honky-tonks of the era, only the opening sequence gives any real glimpse of that world, with Torn wailing away on the corny "She's Just a Country Girl," (all songs are by Shel Silverstein) winking and mugging to the desperately unhip patrons.

The face Dann presents to his fans is one much different from the one he shows in the backrooms and hotel rooms and parking lots and even at his old mother's rundown rural home. Sly, charming, and ingratiating when socializing with regular folk, he's willful and destructive behind the scenes and not above cheaply "seducing" one of the prettier "unhip" patrons or smarmily trying to get out of a speeding ticket. Still it's painful to watch the his humiliation at having to brown-nose an unctuous DJ ("Pigfucker son of a bitch") at a hick radio station, trying to get out of a public appearance by presenting the guy with a bottle of Wild Turkey while on the air ("Here's some game birds I shot"). We can see how promoters pressured and used veiled threats on stars--and how much the artists resented it but felt powerless to fight back. But Maury Dann is not exactly afraid of fighting back. He's a precursor to the "outlaw country" stars like Waylon Jennings and Willie Nelson that would soon rejuvenate the genre. 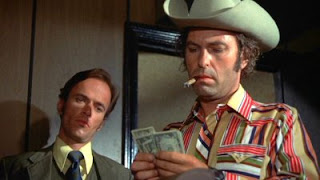 His manager, no-nonsense, Pepsi-swilling Bob (Jeff Morris) routinely gets Dann out of scrapes ("I don't care how you fix it, get me out of this town tonight"), and the affabale, chauffeur/wanna-be chef Chicago (Cliff Emmich) does whatever Dann wants--and eventually takes the biggest fall of all for him. The two women along for the ride are Mayleen (Ahni Capri) his "girlfriend," and Rosamond (Elaine Heilveil ), a young groupie Dann pilfers from his soon-to-be estranged best bud Clarence (Michael Gwynn). Rosamond and Dann have sex in the backseat of his Cadillac while they think Mayleen is asleep next to them. This of course turns out terribly. Mayleen confronts the younger woman in a gas station ladies' room: "You'll never see 21 birddogging other women's men. Get the message?" Rosamond, suddenly wise beyond her years, lights a smoke and coolly replies, "I believe I do--do you?" Zing! 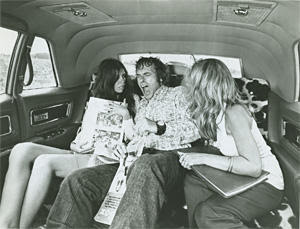 But ultimately, all women are expendable, interchangeable, left on the side of the road. Literally so, for Mayleen, abandoned with a wad of cash that Dann tells her is more than she's worth. Uh, zing?

I took great pleasure in seeing the details of period and place as the entourage of good ol' boys swung through the '70s South: men's hair severely parted and oiled, gas-guzzling American cars made of steel and leather, cowboy-style Levi's, enormous belt buckles, and long-sleeved pearl-button-snapped Western shirts that any y'alt.country dude would kill for. 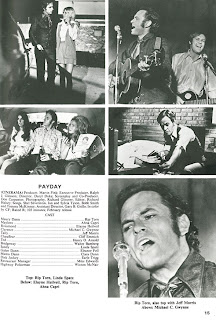 Its screenplay by cult novelist Dan Carpenter, Payday, despite good characterization, seems a tad under-ambitious, indifferently directed by Daryl Duke (Silent Partner). In the dramatic confrontations Torn is doing most of the heavy lifting. Still, the climactic sequence, which finds Dann taking off in a Cadillac into the country in a desperate attempt to escape his fate while ruminating acidly on his childhood, is well-done and keeping quite in character. The title Payday implies not only his getting cash for his appearances but also the movie's final scene. It's worth sticking around for. Grab a bottle of Wild Turkey and enjoy.


Posted by Will Errickson at 10:55 AM No comments: 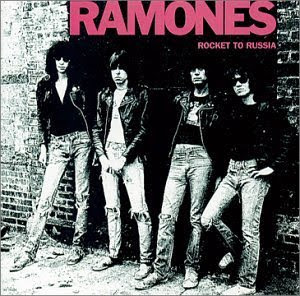 It's about summertime and I've been cruising around in the new ride, blasting an oldy-old favorite: the Ramones' third album, Rocket to . It was perhaps the second or third Ramones album I owned back in the mid-'80s, and I wasn't expecting much as my friend who gave it to me told me it wasn't as good as their debut. How wrong he turned out to be.

Released in November 1977, at the commercial, pop-cultural height of the filth and fury known as Punk Rock, Rocket to Russia was make-or-break time for the band. Sire Records was gearing up for some serious sales and betting a lot on the band. It's no wonder, then, that the album has the band's cleanest, leanest, most accessible sound, refined to defiant, power-chorded perfection, with Joey Ramone's shouts, hiccups, and croons perfectly suited to the full-throated singalong quality virtually every song here has.

How any rock lover can resist the obvious, sugary-yet-substantial charms of intro tune “Cretin Hop” with its no-nonsense two-chord shuffle that opens the album escapes me. Once Dee Dee's bass and Tommy's drums wallop in, the song immediately introduces the album’s good-time freakshow tone.


“Isn’t a song about cretins in poor taste?” an interviewer asked guitarist Johnny Ramone back in the day. “No,” he said, “because there really isn’t any such thing as a cretin anymore. Same with pinheads. If we did a song about retards, that’d be in poor taste.” Holy shit—he’s dead fucking right! You’re gonna have to trust me on this—it was in a fanzine I bought at a Ramones show in 1989 that was actually a reprint of a fanzine from the ’70s—whew.

There's the nihilist's anthem "I Don't Care," a punk dirge in which Joey declares "I don't care about this world/And I don't care about these words." "Ramona" is a bittersweet confection with a lovely melody about a girl and the kids who love it loud; ditto the poison-pen love letter “Locket Love.” One of Joey's earliest songs, written before the Ramones, is the plaintive ballad "Here Today, Gone Tomorrow" (a roaring cover by Ronnie Spector in 1980 with Cheetah Chrome on guitar truly does the song justice). Can’t go wrong with the delights of the covers of “Do You Wanna Dance?” and the live staple "Surfin' Bird." These two songs are a perfect example of what endeared me to the Ramones when I was a teen, that they seemed to get it right: innocence without irony, absurdity without cruelty. Wouldn’t it be funny if we, you know, covered a forgotten one-hit wonder pop song with power chords, tuneless vocals and an irresistible beat? 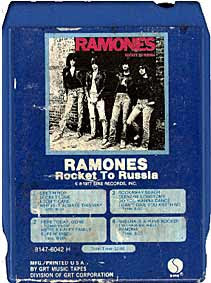 Of course there are the stone-cold classics: "Teenage Lobotomy." "We're a Happy Family." "Rockaway Beach." No Ramones show would be complete without them. And then there's the song that I consider to be just about the most perfect pop song ever written, "Sheena is a Punk Rocker."

An ode to free spirits and non-conformists everywhere, to , and to the power of identity that the best rock'n'roll provides, "Sheena" is everything that makes the Ramones great in 2 minutes 47 seconds:

"Well, the kids are all hopped up and ready to go/ They got their surfboards and they're heading/ to the Discotheque a Go-Go/ But she just couldn't stay/ She had to break away/ Well New York City really has it all—Oh yea-ah, oh yeahhhh!" Second verse, same as the first. A put-the-top-down, fist-in-the-air, sing-along radio-friendly classic if ever there was one. However, when it was released as a single, radio stations took one look at the phrase "punk rocker" and recoiled in fear. Really. It's funny to think today that that phrase once struck horror into the stoutest of record company hearts, but it's true. Once the American music industry saw the Sex Pistols, punk was simply "safety pins, vomit, anger, snot." The whole thing was terrifying, mystifying, verboten.

Ah well, surely the less-threatening sounding "," with its Beach Boys-go-garage vibe and unforgettable chorus ("Rock-rock, Rockaway Beach/It's not hard, not far to reach/ We can hitch a ride to ") would leap to the top of the charts and ensconce the Ramones in the nation's warm bosom. 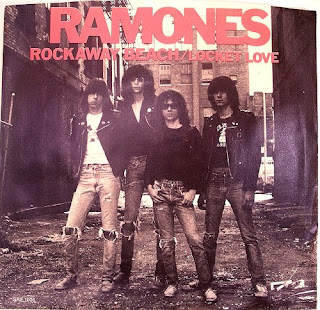 Except that this sunny, funny, delightful little ditty was released in the dead of winter. And it died. And that was it. Rocket to Russia, charting at Billboard #49 (1980's End of the Century would chart a few spaces higher) stopped cold. Despite relentless touring (for the next 19 years!), the spectacle of Punk Rock was a "dangerous" one, and any band associated with it was thrown out with the bathwater. Plus, audiences outside of New York City's Lower East Side just couldn't get with four geeky-looking guys in motorcycle jackets, Captain America T-shirts two sizes too small and ripped-up blue jeans—straight-leg, not flares!—not when there was John Travolta looking so suave and so dapper in his disco get-up. But come on, people, look at these fucking hipsters! 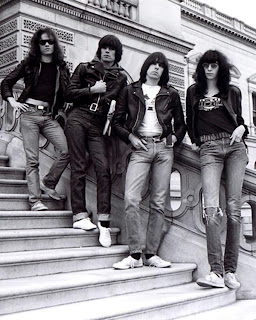 Today the reputation of the Ramones is beyond reproach; unbelievable as it may seem to all those radio DJ detractors and pretty people who were busy buying up those Styx, Foreigner, ABBA, and Bee Gees albums in 1977, they are firmly established as one of the most important bands in rock'n'roll history. Who ever would have thought?

Well, all the cretins, pinheads, and teenage lobotomies throughout the world, that's who. There are such things after all.