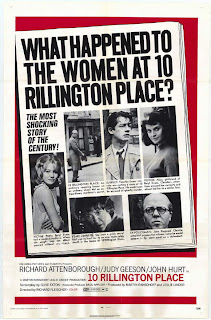 10 Rillington Place (1971, dir. Richard Fleischer) A somber, grim retelling of one of England's most notorious serial killers, played with great and creepy skill by David Attenborough. Disarmingly quiet and deferential, John Christie poses as a former military doctor who now lives with his wife in a terribly run down flat in the terribly run down section of Notting Hill, London, in 1950. The film starts off immediately with that sort of kitchen-sink realism that British cinema practically invented, as Christie murders a young woman by suffocating her. When a young couple, played by John Hurt and Judy Geeson, move into the extra room above the Christies, we know trouble will follow, trouble of the worst kind. Hurt is especially terrific as the illiterate and desperately feeble liar Timothy Evans. Real-life twists and turns make this a rather heartbreaking tale. This is a quietly unsettling and subtle film, the performances and direction are first-rate, and you'll even learn an important fact about British law. It's a little-seen film that is precisely the kind I love to find, one I think folks looking for a true-crime chiller will appreciate this time of year. 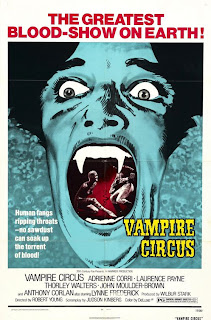 Vampire Circus (1972, dir. Robert Young) A well-known Hammer flick with no US DVD release, I've wanted to see Vampire Circus since I first heard of it in the 1980s. In that time this elusive title's reputation had grown in my mind until I knew my expectation could not be fulfilled. Like a lot of Hammers it starts off with a prologue before the action proper; here, a man watches in shame as his wife offers herself up to a seductive '70s vampire dude. The towns elders converge on the vampire's castle and dispatch him, while the husband is forced to whip his wife as punishment. Or something. Years later, the circus comes to town. The vampire circus. Get it? And they're looking for some payback. The usual Hammer formula - mild T&A, terribly dorky fangs, bad hair for the men - made a bit more interesting by some mild surrealist imagery and a lithe tiger-woman. If you're a Hammer completest, get on board; other folks, stick with Lee and Cushing and Ingrid Pitt. 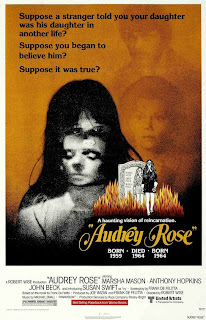 Audrey Rose (1977, dir. Robert Wise) I have never been interested in the original novel nor this movie version, but last Friday night I wanted a creepy ghost story and thought this might fit the bill; and if not, at least I'd get some good '70s stylings. I've recently seen a handful of Marsha Mason movies, and really liked her (Only When I Laugh, The Goodbye Girl, and Cinderella Liberty, the last one the best) so Audrey Rose had that going for it too. Sad to say, this film is just one big piece of crappy horror exploitation dressed-up in adult Hollywood clothes. I found it particularly crass in that it markets itself as a spooky creepy-kid movie but in the end simply exploits a child's death for the bullshit feel-good nonsense of reincarnation; it's not a horror film at all. Despite very good performances from Mason and Anthony Hopkins, and even with director Wise, the man behind horror goodies like The Haunting and The Body Snatcher, Audrey Rose is the major failure I always assumed it to be.

Posted by Will Errickson at 2:30 PM

i'll watch vampire circus based on the name alone! audrey rose was boring to me. thanks for the heads up on these.

I watched a cool Euro exploitation lesbian vampire horror flick called VAMPYRES on netflix instant the other night. Worth a recommend for 70's British styling and a lot of gratuitous nudity.

The movie has no plot other than a couple of female vampires pick up men when they hitchhike and bring them back to their abandoned castle for drinks , sex and bloodletting.

Lots of scenes shot using 'day for night' to boot.

Also check out Daughters of Darkness, also on demand I think. Another female vampire story, tho not as heavy on the gratuitous parts as the film above. Worth a look for that 70's feel and for the lead actress who plays her vamp as a homage to Marlene Dietrich.

Thanks for reading, guys. Daughters of Darkness and Vampyres are definitely '70s favorites of mine! I don't think Vampire Circus is up to their level, however.

Just watched 10 Rillington Place last night on your recommendation. Loved it! Such a well put together little thriller and very accurate to the facts and time period. Surprisingly low-key and thoroughly British entry from the director who brought us Conan the Destroyer and Red Sonja!
Acting was top notch too. Attenborough was chilling and Hurt was heartbreaking to watch.
A great find!

Agreed...Audrey Rose is just lame even with the strong performances.

10 Rillington Place sounds fantastic, I'm excited to check this one out, plus it works with my 70's theme! Zip.ca (Canada Netflix) doesn't have it, so I hope I can lay my hands on it elsewhere.

Vampire Circus is phenomenal, an excellent find for Netflix for sure!