The Other (1972): Old-timey horror, just like grandma used to make 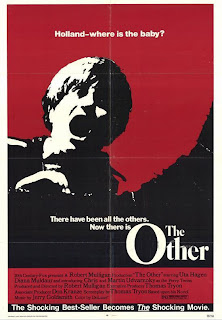 It's practically October and it's time for my yearly ritual of watching (virtually) nothing but horror movies all month long. I know, I know, you're saying, "Will, you always watch horror movies, tell us something we don't know." Well, I go by the old William Burroughs adage that you can't tell somebody something they don't already know, and hence, this post. Monday night I trudged through 1972's The Other, a sloooow-moving period piece about young twin brothers, based on an interesting, pre-Stephen King horror bestseller by Thomas Tryon. 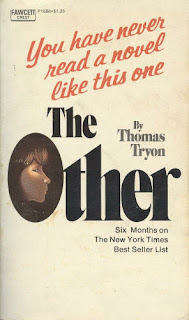 Tryon's a minor figure in the annals of '70s horror fiction. Once a pretty-boy actor in B movies and television, he ended up leaving that field for literature, and produced two bestsellers in the "show don't tell" school of quiet horror in the very early 1970s, long before Stephen King came along and revolutionized the genre. (His other horror novel was Harvest Home, and both books are long out of print, although you can buy them for probably like a quarter at any decent used bookstore).

Director Robert Mulligan, who also directed that masterpiece of idyllic--or not-so-idyllic--childhood, To Kill a Mockingbird--doesn't nearly reach the heights of that film (it would be unfair to expect him to) but does a decent job here. Actually the film is more like a made-for-television movie, and indeed, it only had a very short theatrical run before being relegated to TV reruns throughout the decade, which is where it gained status as a minor cult film. And I'm fairly convinced I saw The Other when I was a kid (thanks mom!), because certain images and revelations filtered through a recurring nightmare I used to have, and watching The Other the other day I was surprised and bemused to find that the major twist of the story was my nightmare exactly. Forget the movie, remember the nightmare.


Niles and Holland Perry are twins in the country town of Pequot Landing, Connecticut, running about their family's farm during the long hot summer of 1935. You remember how it was: apple cellars, hay lofts, jalopies, knick-knacks like amputated fingers, secret treasures, old Russian grandmothers, dead fathers, the Lindbergh baby. Just need the Pepperidge Farm man and some Country Time lemonade. And you know you have to ask: just what is it with the Perry twins? Something, as is so often said, ain't right. 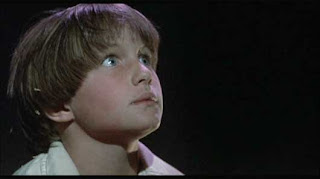 The twins are played by Chris and Martin Udvarnoky, who never, ever made another film. This lends them a timeless quality in The Other that makes them creepier than if they'd grown up in the public eye, although of course [insert obvious Olsen twins joke right about here]. Their acting is a bit wobbly, and the rest of the cast is just so-so, although the great theater actress/teacher Uta Hagen does a nice, just slightly-hammy job as Ada, the twins' grandmother. Guess what happens to her! That's not very nice. 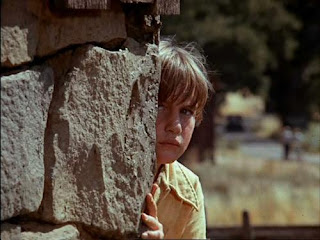 "I'm the creepy one! But it'll be our little secret."

I'm not even going to get all into it; I cheated and fast-forwarded through a lot of the DVD with the subtitle function on. You know how it goes: mysterious deaths, accidental "accidents," lanterns in old barns filled with straw. Someone noted it was like "The Waltons meet The Omen." Still and all, it had its moments of slow, creeping--well, not horror, exactly, but I'm of the firm mind that children are... horrible. So this movie confirms my favorite prejudice. It's not a bad film by any means; the DVD looks great, the cinematography has some really nicely done aerial shots of the farmland, and the tension between the psychological/supernatural aspects of the story is provocative. But the pace is so languid, even tepid in places, so dated to the early '70s that it can be tough going.

If you're interested, you could just watch the trailer, which does an excellent job of mashing the 2-hour film


into three minutes, and with a menacing voiceover and eerie music to boot!

Two points if you can figure out just what Holland did with the baby!

Posted by Will Errickson at 3:30 PM